Ingress: the game that physically changed my life

I live in a relatively cold part of the world, where it is usually below freezing for several months every year. This is traditionally the time for indoor activities, unless you are one of those health obsessed people who just have to exercise every day. My physical activity in winter used to be limited to the walk to and from work...or to and from the bus stop. Computer games was something I played in front of my computer.

In the spring of 2015, my SO had to go abroad for several months. I was alone, and filled my days with long walks on the numerous paths surrounding our home. It was a beautiful, warm spring day when I sat down next to a small campsite in the woods. It suddenly fell into my mind: This is a portal in that game he plays on the phone. I should take care of it for him. He had played it enough that I knew he was on the green team.I went home, downloaded the Ingress app, and was instantly addicted. Since that day, I have gone outside every day, at least once a day, without a break. I have walked over 3000 km. 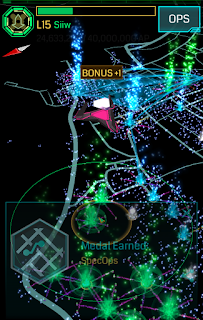 Ingress is a mobile phone game, which uses the real world as its game map. Specifically, it is based on Google Maps and a list of public places of interest. In the first two or three years of the game, players could also submit their own locations. These spots are known as portals in the game. I'll not get into the complicated story, but Ingress has two factions: the Enlightened (green) and the Resistance (blue) Portals can be captured by players and turned green or blue. It is possible to link two portals of the same colour, and if you link three together in a triangle, the area inside the triangle turns green or blue. The main goal of the game is for your faction to own as much land as possible. More populated areas are worth more, and scores are counted every five hours and reset once a week.

What I didn't expect, and what got me so instantly addicted, was the fact that I play in the real world, with and against real people. Every time you do a significant action in the game, it is broadcast in the in game comm. At any time, a real person could walk up to the portal I own and attack it. Any random person could in fact be an Ingress player! Before I learned to recognise the local players, this added a new and very exciting layer to my normal daily routine. Now that I know the players, it just adds an extra smile to the day when I stop and talk with them, It is still a very good thing.

The game also keeps track of how many unique portals you have visited. This has been a very good motivation for us to explore new places. It can be something as simple as walking a street we don't usually walk. One night this summer, we had to wait for a night in a city, between the last night train and the first morning train. Thanks to Ingress, we were constantly occupied with exploring. We actually got so caught up that we had to run back to the station. I could go on and on about how this game has made me go out more, see more places, and meet more people.

My in game name is Siiw. Anyone who reads this is welcome to give me a ping in comm if you try it out.

Official Ingress site, where you can download the app and watch the map

Wiki with good help for beginners