Melatonin changes my sense of time

I work shifts, and that isn't good for my already unusual sleep rhythm. To battle the sleeplessness and following zombie state every time my schedule changes, I got some melatonin pills. Melatonin is a hormone that is produced naturally in the body when it is dark. It is a part of the system that signals the body when it is time to fall asleep.

It does, usually, make me fall asleep faster. It also makes me wake up earlier, which is a good thing when the alarm rings at 6 AM. After taking a melatonin pill before midnight, it feels like I have had a fuller night of sleep early in the morning. It is easier to drag myself out of bed.

What I didn't expect was the effect the drug had on my experience of time. I don't just wake up as easily after 6 hours with melatonin as after 9 hours without, it also feels like it has literally been 9 hours since I fell asleep. I have often woken up at 3 or 4 and thought I have overslept, because my sense of time has been wrong. I have woken up half an hour before my alarm in a panic, because I have been certain that I overslept!

We all wake up several times every night. Many people can't remember this. I usually do. When I take melatonin, I notice the awakenings even more, because there is usually some anxiety involved. It is harder to fall back asleep when my stomach is a tight knot and my mouth is dried out. Sometimes, I am sure that I have been lying still in bed, trying to sleep, for more than an hour. Then I look at the time. It has only been 20 minutes.

The altered sense of time lasts into the morning sometimes. It can feel like I have spent half an hour in the bathroom, and that I have certainly missed my bus, when it has only been 10 minutes. This is really fun when work is slow.

I have asked other people on IRC and on LD4all for their experiences, and nobody else has experienced this side effect. It isn't stopping me from using the pills now and then. I'd rather have a moment of panic in the morning than a full shift as a zombie.
Posted by Tante Rose at 13:25 No comments:

Email ThisBlogThis!Share to TwitterShare to FacebookShare to Pinterest
Labels: sleep

Today, it is time for my annual review meeting at work. It is something we all have to go through, and I don't expect anything shocking or bad to come up. All my coworkers have come out of the manager's office with relieved expressions. I don't fear it. I keep reminding myself that there is nothing to fear here.

When I woke up today, my left hand had broken out in a rash. This thing, atopic eczema,bothered me in my early childhood. I had to see a dermatologist for it when I was 3 years old. It has mostly disappeared since then, but for the last couple of years, it has occasionally popped out in stressful situations.

No matter how much I try to convince myself that the meeting is no danger, my body seems to have a different opinion. The rash says what I sometimes don't want to say out loud.

This reminds me of a story my grandmother told me. She had just started a new job, and she was about to move into her new room in the town where she got the job. The night before her first day, she had a dream about rash covering her entire body. It was disturbing to her. When she woke up, she found her body covered with hives. My theory was that the itch must have leaked into her dream. She thought the stressful dream was the cause of the rash. With what I know now, I wonder if the stress was the cause of both,

She would also frequently experience sleep paralysis and hypnagogic hallucinations in that room. That is a story for a different post.
Posted by Tante Rose at 13:07 No comments:

Email ThisBlogThis!Share to TwitterShare to FacebookShare to Pinterest
Labels: personal

I was just out for a late night walk. This September has been unusually warm, and I need the exercise. Walking, for me, is almost a form of meditation. While my body moves with its own automatic rhythm, my thoughts flow freely.  I lose track of time. 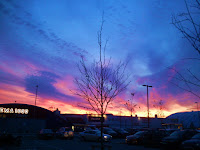 Something made me look up at the sky for a split second. I saw stars, and looked at the road again, but something felt wrong. Fundamentally wrong. My subconscious was feeding me a sense of dread, as if I had seen something impossible happen. This confused me; I had just seen stars?

I stopped and peeked at the starry sky again. Then I saw it. One of the "stars" was in fact a high flying plane, slowly moving across the sky, too slow to be noticeable but too fast to be anything else than a plane. Somehow, my subconscious had registered this subtle movement and interpreted it as wrong, because stars don't move.

It is amazing how the subconscious can filter the enormous amounts of sensory information we take in every day, and only pass on the relevant part to the conscious mind. It makes me wonder how much we miss because it isn't weird or dangerous enough to be noticed.
Posted by Tante Rose at 23:14 No comments:

Synesthesia and the Beer Spectrum

I have a condition called synesthesia. That means that my senses are more or less linked to each other in my mind. Different people get it differently. For me, it is mostly sounds, smells and tastes that get "translated" to shapes and colours in my mind. I can say that a scented soap "looks purple, but smells yellow", and that makes perfect sense to me. The smell gives me a mental image of "yellow".

I like beer, and trying out different kinds of beer. Beer tastes multicoloured. Almost all beer has a dark red to orange flavour from the kinds of malt used, yellow-green tones from hops (Cascade is intensely lemon yellow!) Some dark beers taste more brown than others. The best pilsners have a very pleasant, golden orange taste of fresh bread. Wheat beers and sour beers can even have blue tones, but bright blue usually means strong carbonation.

The idea of a beer spectrum came into my mind when my SO and I had a conversation over a beer in a local pub. "This stout has a more even spectrum than the Guinness. Guinness has a peak in the red part and the top green part, while this one has more orange" My SO gave me a strange look. He obviously didn't have this kind of mental image of beer. Now, he usually asks me for a spectrum when we try a new beer.


After a beer or two, the mental image becomes more pronounced. It tends to fade from my mind and get harder to recall afterwards, so in order to build up a collection of images, I should draw them while actually drinking the beer. The images above are easy to remember, because they represent favourite beers which I often drink.