I travelled in time through a smell

I walked into the shop and got my things. The radio was playing a well known song from the 80s. I know this song very well. A local radio station used to play it several times a day through the early 90s, when I was a teenager and often getting some privacy in my bedroom listening to the radio. It made me smile because of the memories. 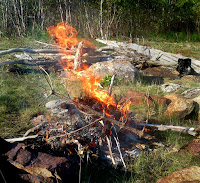 I queued up behind an older woman. The smell of her perfume instantly hit my subconscious. It was the same one as my grandmother used in the 90s. The combination of sound and smell was so powerful that I could vividly remember not only the look and layout of my bedroom, but the mood it had at night.

In our brain, the area that is responsible for the sense of smell is directly connected to parts that control emotions and memories. Scientists have proven this connection.  Only the sense of smell has this direct connection, the other senses have to be processed through the consciousness first, if I read these articles right. Since much of what we perceive as taste really comes from the nose, it is easy to think that eating certain foods can also bring back powerful memories.

I was originally in that shop to get a bag of coffee, but I walked out with coffee and a chocolate bar. The same brand as I used to get in the small town I grew up in. The memory faded quickly as my mind focused on playing Ingress, and I can't even recall exactly what that perfume smelled like now.
Posted by Tante Rose at 13:48